In the way out from Spain, the first stop is France. Here I travel along the south from Henday to Ventimiglia, visiting Toulouse and old friends in Nice. To cross this country by train has been an adventure itself.

I was supposed to wake up early to catch the Euskotren to Henday at 5:00 am. But after two nights sleeping 3 hours I woke up later than expected and get to the train station at 5:02. Two minutes in terms of trains timing changed my day from getting to Toulouse at 12:30 to get there at 15:50. Having to catch the train that departed 15 minutes later did not allow me to get the easiest combination that went to Toulouse so I had to went to Bordeaux to later catch a train to Toulouse. Until here everything is alright. The accumulative delay was supposed to take only 2 hours more. To this we have to add a couple of inconvenience on the way. We stayed almost one hour stopped in Montauban due to a suicidal between Carcassonne and Toulouse. In this journey I will find out that the railways in France are not at all as good as I expected.

Once in Toulouse I went straight to the Hostel. It is located behind the Cathedral of Saint Sernin. A nice area with several bars in the nearest square and drug dealers hunting tourists. After check in I drop my backpack at the room and went for a walk. The next day I had a ticket to leave the city at 13:00 so in total I will be in town for less than 24 hours. I had to optimise my time there to enjoy and discover the city.

Panorama of the Daurade

First I went for a walk along the river Garonne. Pass behind the city walls to get to the place all Pokemon hunters concentrate in the city. La Daurade is a garden in the banks of the river which is the perfect spot to chill out and have a drink. As the weather is sunny and warm this garden is full of people. Continuing the river is the Church of Notre-Dame de la Daurade where you can find a peculiar Black Madonna.

The Quai de la Daurade continues to the “Pont Neuf” where I turn into the city to get lost in his streets and observe the urbanism and culture. First I went South and then turned East to went back North. Toulouse city centre is arranged in imperfect squares and streets that goes North-South and East-West.

I came across the Museum of Jacobins to get to the Capitol square before getting back to the Basilique de Saint Sernin. The square of the Capitol is the mayor square of the city in front the City Hall and the Capitol Theatre. In the centre of the square there is a 12-point star with the zodiacs on it.

The Basilica of Saint Sernin is a medieval basilica with a stunning tower. It’s believe that in the basilica they store one of the thorns from the Crown of Thorns of Christ.

Sunset was coming so I decided to get some take away on the city and went back to La Daurade to enjoy the sunset from there. Chilling out next to the river let me pay attention to the people that was living the city at the time.

After an hour there I went back to the hostel to prepare how I was about to continue my trip and next day adventure.

Before going to the train station I went for a walk. This time I went north from the hostel to the Japanese Garden where people were doing sport, stretching and having a walk in the early morning. This garden has the name of Japanese as they have a real Japanese garden with a reproduction of a Japanese house. 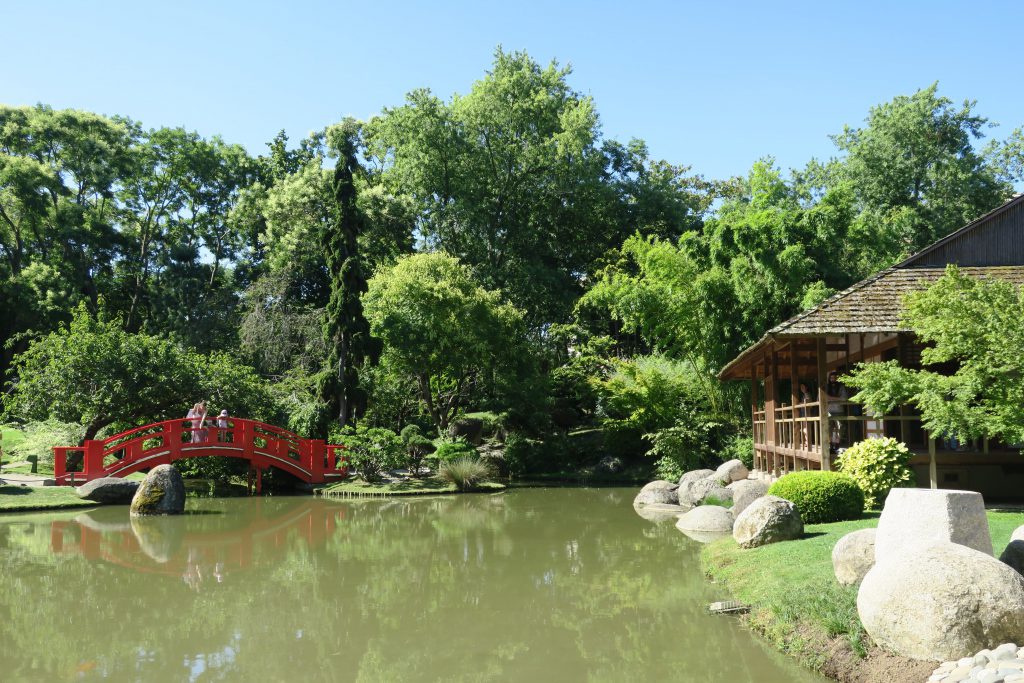 After a long morning at the garden, I went to the south of the city and visit the Cathedral of Toulouse. This Cathedral has the particularity of being built in two parts which are not in line one with the other.

The train departs from Toulouse at 12:57 to get to Nice at 19:30 where my friend Benedetta will await me to dinner. At the Train station, 20 minutes before departing, it is announced a delay of 1:30. All of a sudden it disappeared so I address myself to the platform. There was the train waiting for the passengers. Once in the train we leave Toulouse 10 minutes later than expected. But that is too much expecting for a 4:30 train in France. In the way we stopped at Carcassonne for almost one hour due to another suicide on the rail to Béziers. There we received free meal as reward – Cold pasta salad, water, cookies, bread, juice and some candies. We stopped once again in the middle of the rail a couple of times due to several problems on the way, but the greatest one was in a small village between Marseille and Nice where we had to wait almost two hours. It happened that there was one train stuck on the way. They needed to detach our machine to get catch the other train and bring it back so we can continue our way.

Finally, in Nice at 23:30 I get to my friends’ place where they were waiting for me after dinner. They had cook nice pasta for me that I hadn’t the chance to taste as when I get there I had already eaten something at the train. They offered me however some ice-cream and Italian liqueur.

Next morning, we all wake up early and I went for a walk in town. First up hill to the “Castle”. There is not a Castle, but the ruins of a Basilica at the top and for sure a great Panorama of the city. From the top of the Hill of the Castle – East from the Old Town.

From there I descend to the old town and zig-zag on it visiting the different churches and great houses there.

Church of Saint-Matin and Saint-Augustin

Prefacture Palace and the Flowers Market

From there I walk West by the Opera and the City Hall to get to the Garden of Albert I and to the Rue de France which is one of the main commercial streets in town.

In Nice you can easily see the contrast between the rich people that lives and visits the city in summer time and the not so rich, locals and immigrants that works giving services to the first ones.

I went north to the train station to get my ticket to Torino the following day. I changed my plan of going to Milan as Vittorio, the boyfriend of my friend Benedetta, who is from Torino convinced me.

At the train station I had a curious Anecdote.

Waiting out of the station checking the timetables with my phone before asking inside to book the tickets a guy approaches me. He stopped in front of me and said “Salam”. I turn my face up with a soft smile and looked at him to his eyes. The he continued asking me with a foreign accent “Arab?”. I smiled more and answered him “Unfortunately not”. That made me feel that sometimes I seem Arab which might be of use once I get to the Middle East Countries.

For lunch time I went back to the Port where I started my walk that morning to Chez Pipo. One of the main dishes to taste here is the Succo. It is a bread oven what normally you combine with some salad and Pizza. I have to say, that the salad they suggest me really disappointed me as there was nothing else but green leaves.

After lunch I walk along the west coast from the port where the people goes for a sunbath over the rocks. Here there is less people than in the main beach that links the Castle Hill with the Airport, but there is less place and is all about rocks. 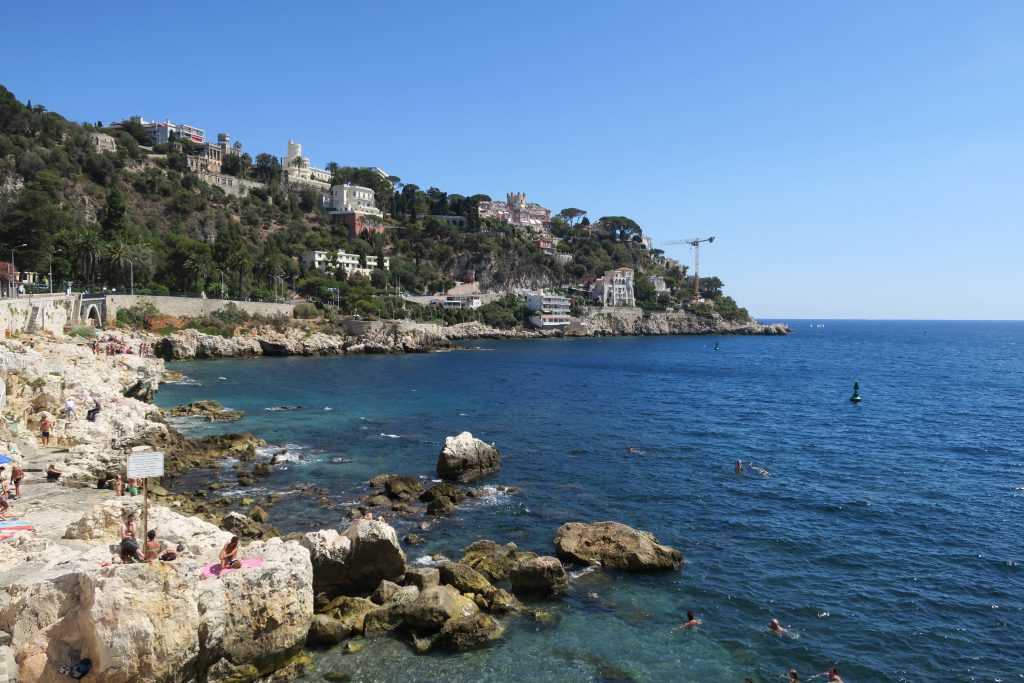 After chilling a little here, I went back to the Port to visit the church of Notre-Dame du Port and from there across Garibaldi Square and the area of Carabacel to the Basilica of Notre-Dame de l’Assomption on the Avenue Jean Medecin. 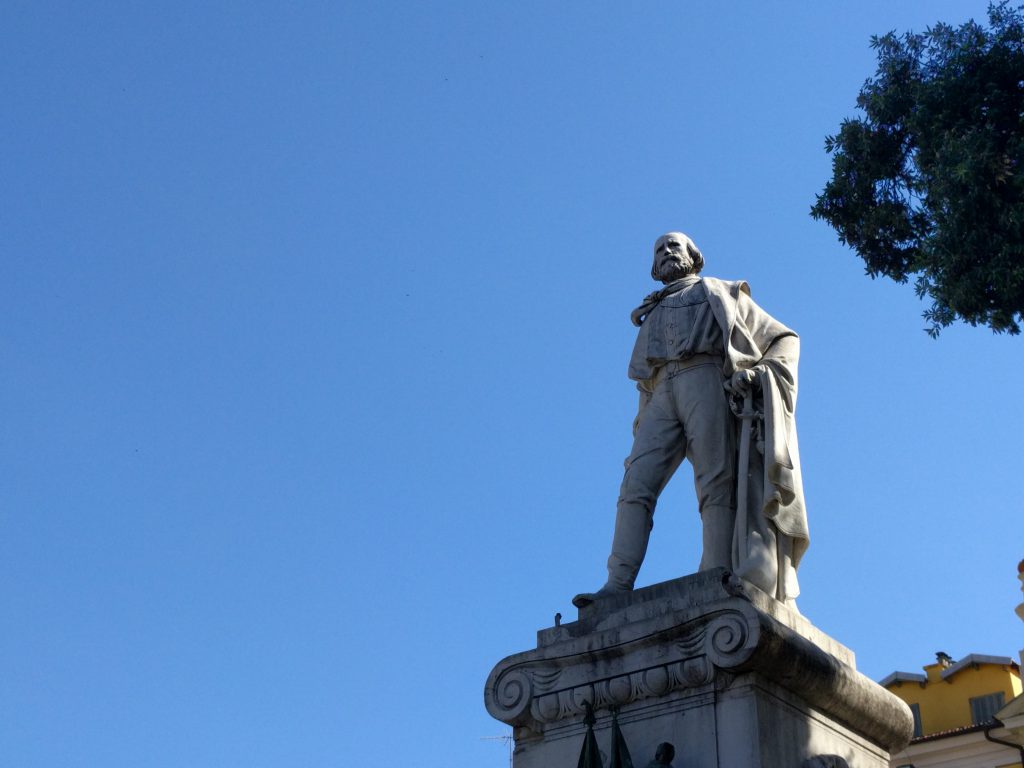 Back to meet Vittorio I took this main commercial avenue and followed the Promenade du Paillon till I arrive to the Piazza Garibaldi. There we had a beer talking about architecture, Couchsurfing, travels and other of our common interest.

At about 19:00 we meet with Beni at their place where other female friends came for an appetizer at then we went to a concert with an inexistent appetizer at stARTup. The concert wasn’t that great and the appetizer not more than a bunch of peanuts.

At the end we were not satisfied so we went to dinner to a nice bar in the avenue of the Market. The bar, named Le Safari, was expensive, but with good local food. There I meet an Italian couple friends of Beni and Vitto. With them we shared adventures and comments about architecture, life philosophy and travels. They also talk me about things to do in Italy while visiting next week. 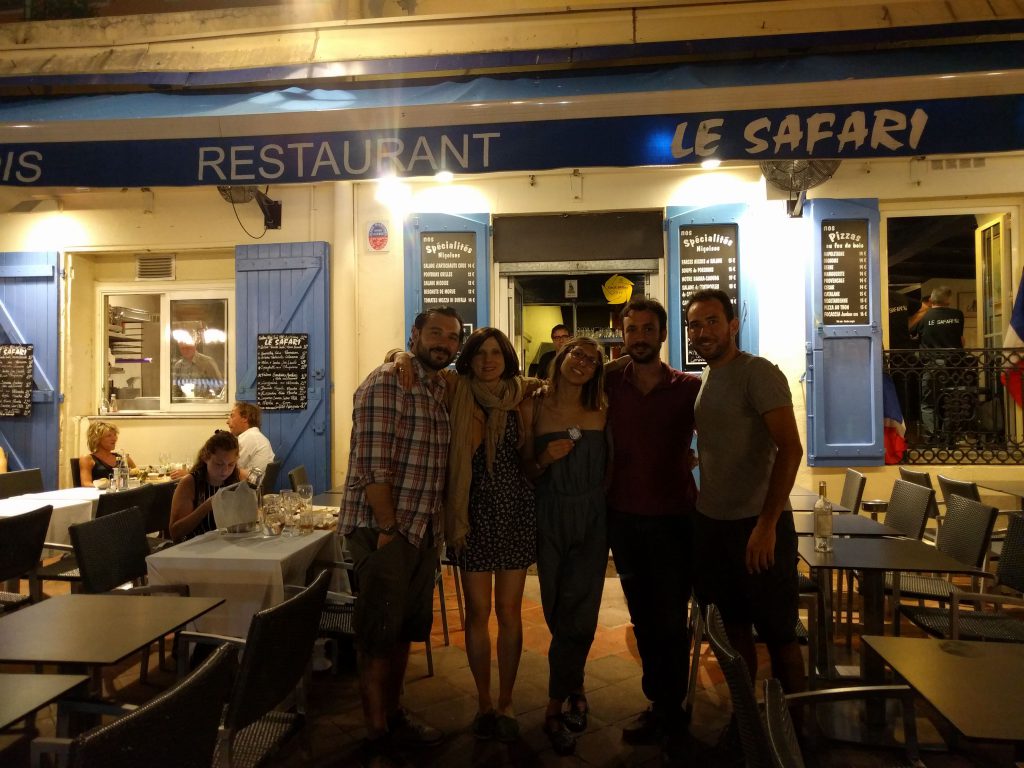 Next to dinner we went for a nice Ice-Cream and back home as next day we had to wake up early as Beni had her flight early morning and one hour later I will start my adventure to Italy. Hope there the trains are better than in France.